Igniting Fire to Put Out the Fire (You Can Do Magic. Do You?)

"You can do magic
You can have anything that you desire
Magic, and you know
You're the one that can put out the fire." - America

How do you experience fire?

I recently used aluminum foil (literally) to put out a fire.  As I sat before our chimnea, the above lyrics sang through my mind.  As I got to "you're the one that can put out the fire," a stick cracked and half of it popped onto the deck.  I grabbed a nearby piece of foil and picked up the simmering chunk literally putting out the fire.

I paid attention to the moment's message because it took me back to another time and an unfinished  story of fire.

Last fall we hiked from the North Rim to the South Rim of the Grand Canyon.  To savor the accomplishment, we spent an extra day at the South Rim.  We visited an art space where I was surrounded by beautiful art yet my attention was on the cardboard cutouts of the Kolb brothers, the earliest photographers of the canyon.  I did not want to walk away from these souls.  There was something so familiar and gentle about them.

We then took a bus to the Grand Canyon's West Rim where we happened upon a viewing scope set on  a condor chic.  #719 was being fed by its parents in a wild nest in Battleship Rock.  As with the Kolb brothers, I did not want to walk away from this amazing bird.  I just knew we were going to see it fly.

Simultaneously this same day a parallel "pull" of sorts was occurring.  While posting photos to Facebook, my friend Amanda's announcement caught my eye.  Amanda coordinates Nashville's "Blue Moves" dance group.  The theme for  2014 would be Fire.  This got my attention.  I  didn't know why.

Before leaving that afternoon, I ran into the canyon market for a pit stop before the road trip south.  I walked in and just about as quickly walked out as an employee told me the restrooms were outside the  building.  Yet I heard what I needed as a line from a song playing on the store music loop caught my ear as I walked out the door.

The line was "You can do magic."  I didn't even know who sang this line from a song decades ago but I heard it.

An hour later driving outside Flagstaff, I noticed the sky.   We expected to come upon emergency crews any moment because the area to our west looked as if it was on fire. 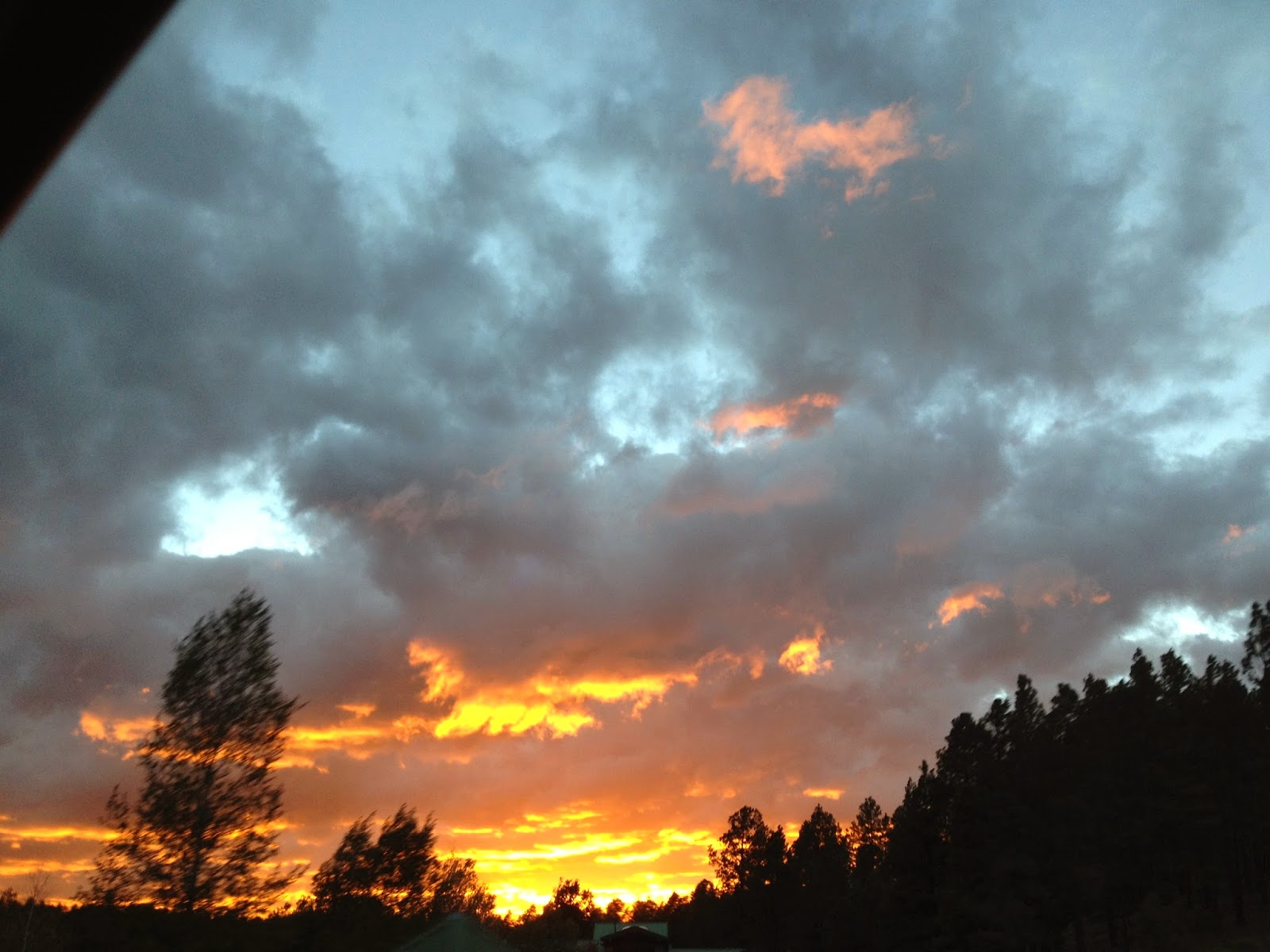 We arrived after dark in Sedona.  I had hiked into the canyon with a cold and unfortunately passed it along to Jerry by accidentally using his toothbrush for days.  (I only recently confessed the toothbrush mix-up.)  Worn out and sick, he turned in early as I read "Live" a local Flagstaff newspaper.

The cover story was of photographer Dave Edwards visits to Mongolia in the early 90's.  During this time he saw street children whose numbers swelled to 4,000 starving, taking refuge in underground heating-duct tunnels, and prostituting themselves to survive.  What started with 19 duffel bags of clothing that Mr. Edwards personally distributed in one return visit has now become a fifteen year effort involving Flagstaff individuals and groups in many others ways.

This got my attention even more so when I read the group's name is FIRE - Flagstaff International Relief Effort. Fire had crossed my radar three times that day.

Fire through dance
Fire in the sky
and FIRE in Flagstaff.

Each aspect of fire related to connection whether it was through Blue Move's dance group telling stories of passion's fire, the shared sky under which we all live or of community service reaching around the world.

I laid the newspaper aside and turned off the light.

As I fell asleep, another line to the song in the market came to mind.  I didn't even know I knew the line.


Did that song really contain that line?

The next morning I looked up the lyrics and found I was right.  I reflected on the three instances related to fire and my not wanting to leave the photographers, the condor, and the canyon.

I thought of the fire of my childhood, hell's fire of which the preacher preached.  As a child, my fears and tears put out my personal fire regularly through crying alone, not having my voice, and living with Disappointment.

I am different today or so I thought.

Later that morning as we headed out to hike, this amazing piece took my breath as we drove past her.  Jerry stopped the car so I could stand before this figure, the Angel of Healing, that stirred me so.  Her creator James Muir wrote of her bringing love and peace to the Earth.  I read this and as happened the day prior, I was filled with emotion which I held at bay.

We hiked that day but I was not fully present partially because of all I held and also because for the first time after many visits to Sedona I did not want to be there.  Jerry asked periodically if I was okay and I insisted I was.  This was a long awaited birthday trip for him and I was already devastated that I had given him my cold.  I couldn't bring myself to say I wanted to be elsewhere.  So I made myself miserable not to mention confusing him.

Two days passed until I finally told the truth.  I wanted to be at the condor release three hours north.  To my surprise, Jerry didn't even realize it was that day.  (Take note.  This is a perfect example of poor communication on my behalf.)

When we were at the canyon's nest viewing site, a naturalist told us Saturday was the yearly release day for young condors raised in captivity.  She gave us each a brochure about the Vermilion Cliffs which we had passed en route to the North Rim to hike.  I thought Jerry was taking in the information as she shared but I never asked him and I never said, "Let's go to this."  Having just hiked ten miles nearly straight up while having a cold, he hadn't heard her.  I did an oh-so-not-good thing to do. I assumed he had and that he didn't want to go.

To redeem the day, Jerry suggested we drive to Flagstaff to the Hopi Festival.  Standing at the festival in front of an information booth on the Hopi Mesas, I realized I was exactly where I was suppose to be.  Nearly twenty years ago, I had visited the mesas.  Now here before me was a brochure about that sacred home in Arizona's Northeastern corner.

That's when it happened again.  I saw the symbol and words "The Center of the Universe" and tears filled my eyes.  I stood there overcome with emotion yet not wanting the young women at the table to see me.

We spent much of the afternoon at the Festival watching dances and talking with vendors.  All the while, I watched and wondered as to what was going on in me.  I was listening from my head trying to figure out what these tears were about so I wouldn't miss their message.  And yet going into my head means I most likely miss their message.

Mystery's message, at least for me, doesn't show up through thinking but through listening and paying attention.

Does this mean I have learned the lesson of more deeply listening and letting go?

Is the Mystery over?

One night back in Nashville, I came in from star watching.  Jerry who was already in bed, had left a magazine open for me.  There was news of #719 in the quarterly issue of "Canyon News," the magazine for members of the Grand Canyon Association.

I read and wept tears of such joy.  #719 opened its wings and flew for the first time a month and a half after we were there.

Then I saw the story's message meant for me.

Condors learn through experience.  I saw that first line and knew this is exactly what I needed to see.  I am here to learn through the experience of being inside this mind, body and heart that is Dawn's.

Remember how I suppressed tears while standing before the sculpture of the healing angel and the young Hopi women at the festival?

When I hide my tears from myself or from others, I ignore my experience.  I put out my fire.

When I don't say what I want or need, I miss the opportunity of being vulnerable.  I put out my fire.

When I do not realize the beauty of TEARS, my heart's language whether I am grieving or joyfully moved, I negate my experience.  I put out my fire.

When I walk away without fully attending the nameless experience swirling in me, I put out my fire.

I put out my fire in a world that needs my fire, the fire of great love, compassion, wonder and curiosity.

If we were each deeply mindful of experiencing Life through just our Self, not the media or anyone else, much violence would cease starting with the unintentional violence we do to ourselves and spreading out through all our relationships.

This amazingly beautiful world that is on fire due to pain from ignoring who we are would be on fire with great Love and Compassion.

We can do magic and this is the magic I'm here to do.

Powerful teachings, fire woman. Let us all remember to let our passions burn through our actions and attentiveness. I needed this reminder.