We are Love Returned

For the last two weeks, Bogey has found his way front and center to my lap each morning.  I thought this odd until I realized the beauty in his presence. Seven years ago, he avoided my lap. 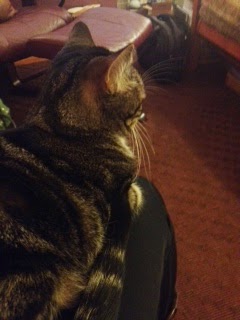 I had forgotten this until the second day he scrunched his tabby body into a little ball and sat.  Normally I would gently push him aside and tell him I needed to write.  Fortunately this morning, I was listening.  In the quiet, I realized seven years ago, the spirit that is now Bogeysattvah was leaving through her dying process.

Templeton, my cat at the time, and I were parting ways after nearly 17 years. She wanted nothing to do with my lap.  The cat that for years let me cradle her like an infant would sit across the room or in close proximity as I wrote each day but never close enough for me to hold her.

Until the day she died.


(Backstory:  When the tumor was suddenly discovered shortly after Christmas, I made the call to have Templeton euthanized.  A day after scheduling an appointment for her vet to make a home visit, I realized my cat wasn't in pain.  Although she wasn't eating, she continued her rituals with me.

I was the one in pain, emotional pain and I had unconsciously scheduled my cat's death on a Friday so I would have the weekend to grieve.

With this realization, I called the vet to cancel her visit.  She didn't answer the phone but within minutes called me. I assumed she had caller id. She did not.  The vet was calling to tell me she had double booked and needed to reschedule.

I shared my realization and we agreed my calling her and her calling me suggested canceling was  Divine timing.  I decided to let the journey of Templeton's passing unfold and be with
where it was taking me.

During the nearly three weeks that passed I shared every story with Templeton that I recalled around our life together from my getting her as a three-pawed kitten one June weekend in Centennial Park to her being trapped between the floor joists of our second floor overnight during a home renovation.  I spoke of the darkness that would eventually come and the importance of her looking for the Light of her Star Kin as she passed. I knew they would come to guide her home.

I also told her that I knew she was having an equally hard time saying good-bye to me.  When our animals leave, it's a two-way street.  They may have an even harder time leaving because they don't have words with which to share with us what we have meant to them.

I cried more more deeply in these days with Templeton than I've cried over any human. I cried so much that I finally got to a place where I felt great joy and deep honor in being allowed to experience this process with my feline companion.

Last but not least I asked Templeton to return to me after she had time to recover from the sudden illness that was taking her. I specified the time frame and asked that we would know one another.)

I knew the day Templeton was going to die.  All of my clients cancelled on one particular afternoon and no one of my waiting list could come in during that time. I had an entire day free and knew this was the day.

That morning when I walked down stairs, she meowed and looked at me.  I scooped her up and held her for seven hours except for the thirty minutes I took to drive up the street to the chiropractor.  She died that afternoon cradled in my arms on the futon in my office and we held a ceremony honoring her the next day.

And four months later just as I asked, I knew that Templeton had returned when I saw the little tabby butt at Berry Hill's Cat Shoppe.

In early May, I began to visit cat rescues as I had requested we find one another around my birthday.  I held kittens in shelters and shops, looking them in the eye trying to discern whether our pact was fulfilled.  I had just about given up when one night I, one not prone to panic, was suddenly overcome with panic that came from nowhere.

I was consumed with panic and an accompanying need. I had to find Templeton's kitten photos, something I had not looked at in years.

I found them tucked in a box and realized my cat that grew into a Maine-coon started out looking like a tabby. I had completely forgotten this. The photos oddly eased my anxiety.

The next morning before leaving town to hike for the day,  I knew I had to return to the Cat Shoppe. I had just been there the day prior at closing. Truthfully I had been there just about every day that month yet I felt compelled to go one more time.

I opened the shop door and immediately knew why.  My breath was taken by the first thing I saw when I walked into the store that morning.  The butt of a tiny tabby prompted me to exclaim, "Who's this?"

Whopper Jr?! This was not fast food I could avoid as I usually do. The scrunched up little ball of fur on the rug at the store's front door took my breath. He had been left outside the shop by a customer who found him the prior night in a Burger King parking lot. (I suspect this was around the time of my anxiety attack.)

I held Whopper Jr. many times over the next month. I visited the Cat Shop just about daily to hold him yet I could not decide if this was really Templeton because he refused to look at me. He refused to give me the sign. How could I bring this kitten home? Then one day, I knew. I was walking through the house and heard, "You had your sign. You felt it. You experienced it inside." Entangled in second-guessing and the many questions inside my head, I had forgotten what I knew within.

After work, I brought Bogeysattvah home. Upon entering the house, he looked at me.

I have known many times since that Bogey carries the spirit of Templeton. He shares many of her mannerisms yet as the years have passed, I have forgotten the beauty of the story that unfolded between us.  In the last couple of years, Doubt crept in causing me to forget what I knew to be true. I wasn't aware doubt occupied space inside me until January 29, 2014, the anniversary of Templeton's death.

That particular morning I awoke to find Bogey who had never been sick extremely so. Vomit and diarrhea were all about the bathroom. Bogey was curled feverish and lifeless on the sofa exactly where I sat with Templeton as she died that day six years prior.

This was no accident, yet fear kept me from being deeply tuned-in. Fear kept me from listening. I was scared, angry and mistrustful.  What was Mystery up to in my journey now? I didn't want to call a vet. I feared bad news. Yet I called one who didn't have an opening until I explained this was the anniversary of my cat's death and that Bogey was that cat. The vet said she needed to call one client then arrived at my home within the hour.

She did bloodwork and gave Bogey fluids. I held him for most of that day.

The next morning, I awoke to a bright-eyed Bogey and a call from the vet saying his blood work was perfect. I should have been comforted. I was not.

Templeton had "perfect" blood work only four months prior to the sudden tumor that took over her insides and led to her death. Could I trust Bogey was really okay or was this a cosmic replay?

In my journal from a year ago, I wrote: Is this the beginning of the end, a sudden unanticipated decline? This part of me that is weary of pain thinks, 'Fuck it. I give up.'

My friend and intuitive Maryann suggested years ago, when I feel stuck to ask myself two questions:  What is this I am knowing and why does this matter?

Immediately I knew I was being shown how our dear world has gotten into this place, how the heart shuts down and walls itself off from potential hurt and pain.  If I someone of huge heart can suddenly find myself thinking 'Fuck it' how much easier is it for someone with deep layers of humiliation, pain and shame to disconnect from their heart. The bridge breaks down within and without when we deny and disconnect from our insides creating a negligence and subtle violence first toward ourselves.

I was being reminded to never doubt what had transpired between Bogey and me.

Never doubt. Never forget. And always Listen but did I? 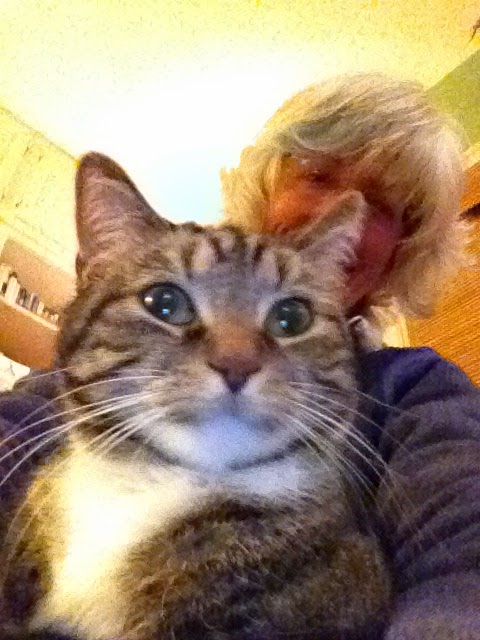 This year rolled around and what happened? I forgot. 2014 was the year I felt magic slip away in my life and I didn't even know it had vanished until recently.  2014 was hard in quiet, subtle, inside ways. I didn't realize Doubt and Distance had slipped in until these recent mornings as Bogey has perched himself in my lap. I wasn't fully tuned-in and listening until that second morning he curled himself upon me. I viscerally felt his availability and presence.

Then last night Bogey came to bed and stretched out by my side, something he has never done. My heart area became a pillow for his dear head. As he lay there, I clearly knew I've spent the past year quietly afraid of loosing him. I have not trusted 'perfect' bloodwork. I have kept him at a distance that I didn't even realize until that moment.

Life moves forward and yet in these moments like the one with my cat I am reminded of the importance of remembering the backstory, reflecting on the past, listening to the threads and layers of once-upon-a-time in my very real life so that I do not forget.

Entangled in all the things we think we have to do and the stuff that fills our minds, it is easy to  neglect what we know in the quiet.  We forget the beauty of the story that we come to Earth to live.

Reminisce, tell stories, to your pets to your family members and friends.  When we stop story telling, we forget.  Our personal stories are the stuff of our lives.  As you story tell, listen for other layers, lessons and meanings in the stuff of your journey.

We are Love Returned.

For other stories in this "Series" of sorts between Bogey, Mystery, Templeton and Me click here: Missing the Mystery and Spirit Persisting: Divine Staging Every Day,   Dates, Day and Doves: A Story of Waking Up,   Full Circle,    Exercising the Heart,