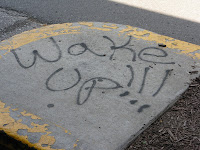 A friend from many years ago contacted me this past Spring after synchronisitically finding my radio show "Wake Up & Live" on-line at the Radio Free Nashville program schedule site. She shared that for months she would park in the same parking spot at a local grocery. She would open the car door and see "Wake Up" spray painted on the curb in two areas and wonder, 'Wake up to what?' Through a series of events, we rediscovered one another. Months later, I found the parking space and of course, had to photograph the mystery message or directive spray painted I suspect by some teen who unbeknownst to him or her also had a message for me.
In reflecting on the close of one year and the beginning of another, I've been pondering what it means to 'wake up' in my own life. Thus far I've determined, waking up is far more simple than complex and it's not found in the mall or stock market. 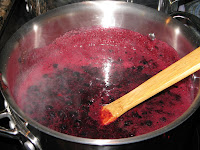 I know I'm awake when my insides smile and making blueberry jam this summer did just that. Early one morning, in July's hot summer sun I picked blueberries at my friend Bernie's farm, blueberries which I in turn cooked and canned. I had never canned anything in my life, but I had grandmother's who had. I stood in the kitchen feeling deep joy and a kinship with these women on my family tree who were long gone physically yet so present with me. As the steam rose and sweet smells filled the air, I danced around the kitchen to Ray Charles "One Drop of Love." I filled a dozen small jars with jam juice and berries then as I began to clean up my mess, I heard a pop. In canning popping is a good sign, a sign that I would be able to eat blueberry jam for months to come. I called my mother and a friend who celebrated with me. They knew exactly what I was feeling, well maybe not the dancing part. The little symphony of pops continued for quite some time as each jar in its own time sealed. Making jam brought me deep joy.
I'm awake when I feel joy as well as sorrow. I had no idea that I would loose Templeton, 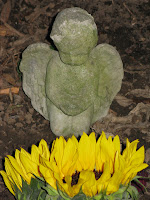 my dear cat of nearly 18 years,earlier in the year. Templeton's illness and passing was one of the most beautiful, gut wrenching experiences of my life, topped only by the experience I had with my father three years prior as he passed. During the lengthy period in which Templeton quit eating and declined, she taught me the importance of living each moment with love and in love while releasing fear, control and my agenda. Templeton and my father were similar in that both when it came to closeness would rather be alone than with, yet in their passing I was allowed to be with. My father allowed me to sit by his hospice bed and sing. As we held hands, I sang every song that came to me via the hymnal from the church of my childhood still etched in my memory. When I finished those, I sang songs from the women's drum circle of which I had been a part then I went through hymns again.
Templeton allowed me to hold her for seven hours the day she died. I held her fearlessly (which for me was a feat) feeling only love and gratitude while reminiscing about our journey together.When she died, I wrapping her in quilt squares with butterflies on them made by one of my grandmothers. She was buried the next morning in our backyard with sunflowers to cover her grave. Templeton and my father taught me that the heart is deep and rich and only stopped by us when we live on autopilot and prevent ourselves from feeling. Tears are part of the heart's language but how often we ignore them rather then embrace and let them flow.
I am awake when I listen to and follow my heart, my personal GPS system. After Templeton died, the last thing I wanted was another cat. Yet my neighbor called two weeks later just prior to Valentines to tell me that a kitten had showed up at their home. This kitten embodied love, or so she said. I agreed to look at her. That night I reluctantly ventured down the street. I looked through the window and saw a little calico kitten playing with my neighbor's daughters. My heart literally lept. Mystery entered my life that night and five months later was followed by Bogeysattva who took my breath away when I saw him curled in a little bundle at the Cat Shoppe. 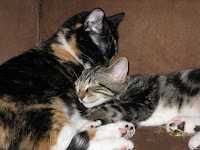 These litttle bundles continuously remind me of staying awake to love and the opportunities of living rather than sleepwalking through life.
Waking up is vital especially in these times where superficially things seem to be going very wrong. We've the opportunity every moment to wake up and live life at a deeper level. What clues and cues surround you that suggest how you might wake up to some unlived aspect of your life? What brings you joy? What touches you and makes you cry? What makes you smile inside?
Posted by Unknown at 10:00 AM 2 comments: