Guns, Gender, God, and Grace - Thoughts on This Journey

As I hiked a new trail a week ago in the Smokies, I glimpsed a large feather hanging in front of me. I thought of a Native American headdress and instinctively reached up to brush the feather out of my eyes only to realize what I cognitively knew. There was no feather.

I stopped momentarily. This got my attention as did the sun shining exceptionally bright through the cathedral of trees towering above me. Stopping allowed me to see the spider's web hanging before me. I sensed I needed to take a photo of this place. 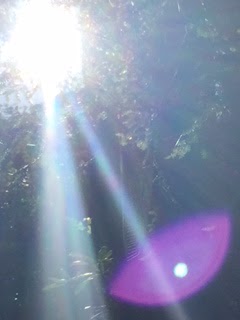 The photo confirmed what my body felt. Light from the Universe was pouring in from above as fuchsia light shown on the other side of the web (hanging vertically near the middle of the photo).

As I continued hiking this land once home to the Cherokee, I was mindful of the unfathomable pain of being torn from home as white man claimed ownership of what wasn't his. I pondered how everything in life's web is interconnected.

This was a new trail for me to be hiking. The further I ascended, while not knowing what lay ahead, the more sweaty, tired and self-focused I became. I periodically hummed "We are climbing Jacob's ladder," a song I never sing yet I assumed came to me due to climbing. Physically I was exhausted yet internally felt like I was walking in heaven on earth. Gradually I neglected my experience with the web and light 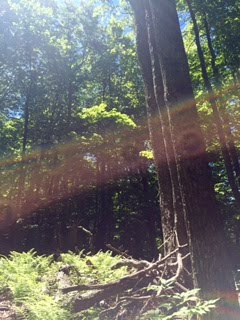 ....until I reached a place in the descent where I sensed something light-related happening. Again I took a photo yet this time I saw eyes in rainbow-colored light of lines and concentric circles traveling what to me felt like DNA. I hadn't a clue what this meant.

That evening upon reaching my room, the first thing I did was read that fuchsia light represents forgiveness, mercy and transmutation.

The Native souls of this soil got my attention through the feather as a means to get me to stop and see the spider web and the Light. Sorrow and pain have been transmuted throughout time as victims of violence offer their offenders forgiveness and mercy. (I think particularly of a story from South Africa that Andrew Harvey tells in which a woman whose son was killed during apartheid asked that the man, a white officer, visit her weekly and be her son since he had killed her (black) son. The officer passed out in the presence of this woman's mercy.)

I fell asleep with just about every muscle in my legs and feet aching yet grateful I heard this Truth revealed as the Divine Light of Love pours to Earth and onto the web of all my relations (not just humankind but onto earth's soils and waters, as well as her plants, animals and trees).

I fell asleep forgetting the rainbow bridge photo and not knowing until today that to some it represents the DNA ladder or bridge between heaven and earth and forgetting until moments ago that the rainbow flag represents the LGBT community. I fell asleep that night not knowing that in just over a day, publicity's light would shine on that very community targeted by violence in Orlando and stirring conversation, debate, attack, responses and reactions related to guns, gender, and God....

....and potentially providing an experience of grace if we are open.

A deep breath comes from me as I write the line above for sorrow, outrage, trauma and fear prompt closing rather than opening. I know "closing" personally though I didn't loose anyone in Orlando. I also know that grace arrives through and after the weeping, raging and questioning. That present events, when we reflect, reveal how we are connected to these seeming horrors of the world. And reflection allows us to respond with mindful action.

Just as I didn't know what lay ahead on the trail, we do not know at any moment what lies ahead. We make plans and fill our schedules yet we do not know what Mystery has planned. Yet just as I stopped and saw the web of connection and sensed I was to take the photo, when we stop, we are more likely to see how we are connected to one another. When we mindfully stop, we are more likely to see how external events are connected to our internal workings. Stopping allows us to sense what the next wise step (response) is. Stopping isn't passive. Stopping is actively accessing our beliefs, fears, judgements, the things that drive us unconsciously.

Stopping to be with the depth of feeling can in some allow space for forgiveness and mercy to the offender as well as to those who will continue to offend through fear-based comments and stereotypes.

We are on Life's trail or Jacob's Ladder as hummed through me. Contrary to the news when bad things happen, we are as a whole ascending. Consciousness is rising. Our capacity to Love greatly and deeply is increasing. We don't know what lies ahead yet we can know we are not alone. When we become self-focused due to discomfort (the fear of "other," those who are different, feeling vulnerable due to change) it is easy to forget that we are all connected in the greater web of life. It is easy to forget the Light, the light pouring in.

I share what was shared with me in compassion for those who hearts are breaking, for those who will now live with a hole resulting from loss and I share this on behalf of the tortured souls who take life. The trauma, terror and alienation of their inner world must be unspeakable.

May those of us who are in this time attuned to receiving Divine Light be anchors for mercy, forgiveness and wisdom so heartache, discord, and terror can be transmuted and Peace be felt by all Living Beings in Love's Great Web.

Dawn. This is for me the strongest piece I've ever read from you. My heart chakkra is is just buzzing. What beautiful words, thoughts, imagery. I've already told Ken who called before I finished it that I was sending it to him. BRAVO. Thank you. Shared on FB and tweeted.