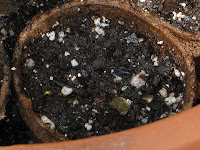 Like a seed in soil, I’ve been in the dark this past month, not from intentionally conserving electricity but a darkness born of the heavens and hormones. The one-two punch of Pluto and peri-menopause affected and afflicted my body, mind and spirit. As I lay on the sofa recently on a ‘work’ day, I thought about how we don’t ‘be’ very well in our culture. Our language and interactions are all about doing. You meet someone new and it’s “What do you do?” You see a friend and hear or ask, “What did you do today? What are you doing this weekend?” Vacations are book ended with queries like “What are you doing on vacation?” and “What did you do on vacation?” For someone like me who wants to be sure I don’t miss my life, my anxiety increases ten fold during a dark time as I think, “What am I doing? I’ve done nothing with my life.”
We certainly don’t do darkness very well. We’re too busy to sit around and just ‘be’ in it. This for me at least means I’m not ‘accomplishing’ things, tackling my ‘to do’ list or determining what I'm doing here on Planet Earth. But darkness isn’t to be done. It can only be experienced and honestly I’m more afraid of it than I realized. I have been burned out, worn out and exhausted in the past but never quite in the place I found myself the day I befriended my sofa. I offered myself very little of the hospitality for which we Southerners are known. I was not good company even with myself. I was further immobilized by an assortment of anti-being messages that invited themselves over, a support group of sorts. Were they ensuring their seat at my internal round table out of fear that Pluto was about to extinguish them?

I was in a place that was beyond words and for a Gemini who thrives on communication within and without, this was freaky. (I was so depleted that the week prior I had lost all the files on which I keep my writings and didn’t really care. I found myself relieved.) Being wordless, I reached for others’ words among a stack of books recently retrieved from the library. I scanned two Joan of Arc books. Joan wasn’t short on stamina. I read inside the cover of Donald Spoto’s book on Joan, “Anyone who follows their heart has the power to change history” as well as lines from the play “St. Joan” where Joan says the voices she hears come from her imagination which is how all of God’s messages come to us.

This only served to intensify the darkness as I feared my stone heart would never feel again nor would my imagination be resurrected. I set “Joan” aside and opened “Longing for Darkness” by China Galland which I didn’t realize until much later was oh so appropriate for the pit in which I found myself. An inner part knew I was reading exactly what I needed to be reading as I called the words but couldn’t assimilate the message. I was still in the dark. I ate chicken pot pie because it was found under "comfort food' on a to-go menu I had from a nearby restaurant, but the puff pastry filled with peas, carrots and potatoes brought no comfort. I went to bed.

The next morning I put into semi-coherent ramblings everything that had been rolling around in my head to which my dear listener said: “Of course you feel bad, you’re getting pummeled right now on just about all levels.” In that moment, like the old hymn goes: I saw the light. Being heard combined with a bit of progesterone and realizing I could work with the planets rather than struggle against them, created just the shift that I needed to sit in th 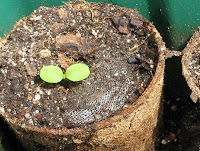 e darkness while discovering light. I didn’t suddenly jump into doing mode, if anything I went even more slowly because I wanted to harvest everything I could from this place. This is when I noticed my lettuce seed had sprouted.

From the dark soil of the little peat cups, my lettuce sprouted as had my spinach! Although I grew up with paternal grandparents who gardened, I only dug potatoes which was like finding treasure when visiting them. Now I marvel at the little green wisps that poke from the soil and grow a bit daily. I now recall that over month ago I had awakened in the night hearing: Teach people to feed themselves. I was bewildered. Did this mean teach people to grow their own food or more metaphorically speaking, feed their souls creatively? I forgot the message and planted my few seeds without remembering.
I felt such joy sitting in the presence of little sprigs of green. I took a multitude of photos that I flip through in my digital camera at stop lights or the bank drive thru. I’m the one smiling at her lettuce and spinach which is a far cry from the drive thru breast exams I covertly did upon turning forty some years ago while at stoplights. 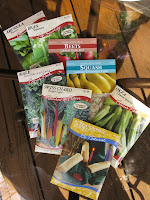 Like parents who proudly show photos of their children, I’ll show you my pride and joy,
my little ones, my crops. The media covers the octomom. I’m the octogardener on my
way to having more seed packs than my little raised beds can handle.

Why have I written the world's longest blog about seeds sprouting? Because
I want to spread the joy of miracles. It is miraculous that a meal can come from
a speck, something the size o 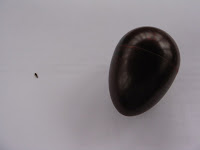 f a flea. (In case you've never actually seen a seed,
of course, I've a photo of one. That's the seed on the left juxtaposed to an egg sized shaker.)

These seeds resurrected my heart and imagination. Now after seeing plants at the local co-op, I, the recovered do-er of course feel far behind. Store bought plants are at least six inches tall and mine are just getting started. I feel so behind. I should have been doing this a month ago. I rush to the store to buy soil and fall for miracle grow rather than good old fashion manure and compost. I’ve decided I will return that but for now, I sit with my lettuce and spinach and continue to take photos and BE.
As I listen I’m offered profound seeds of wisdom or as I’ve heard Jean Houston say, I see the all in the small. Each tiny seed embodies the male and female. Female energy is receptive. The seed is receptive to the water, nutrients and warmth of the sun. Male energy is active. The seed when the time is right goes into action, breaking out of its little shell and reaching for the light. The seed holds the tension of two opposing ways or energies, being and doing. Then the plant sinks its roots into the dark earth while reaching for the light above. This is how I am to be and do, keeping both in balance so I can grow.

I notice that what emerged as one leaf initially has now become two. Contrary to the marriage vow I’ve heard couples take where two become one, my lettuce is the opposite. One has become two. If my head of lettuce is normal, soon two will become three, three will become four and four five etc. 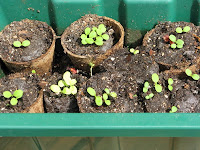 Then I recall a quote from the Talmud, I believe, that reads: Every blade of grass has an angel over it that whispers: Grow. I bend over my little plants and whisper, “Grow.” We are earth angels to the plants and animals and I have angels (planets like Pluto and people like my listener) that desire my growth. That evening I plug in the tv to hear President Obama’s news conference. His responses related to the economy are peppered with the word: Growth. There it is again. I ponder: How do I want to grow?

I go lie in the yard, on the earth which if you really think about it is internally very dark yet filled with possibility. I've pen and paper nearby in case the seed of an idea sweeps through looking for fertile ground. For now I could not be more content, just me and the seeds, being and doing in a hopefully more balanced choreography which is just what I'm to be doing in my life. For me, this is Good News.
- From Dawn The Good News Muse

PS – The day I complete this I read an email that I’ve received from many sources regarding a bill in the house of representative. Not surprisingly, HR 875 is supported by Monsanto, corporate seed and feed, as I call it and ultimately could be devastating to organic farming. I immediately went to house.gov, typed in my zip code and got the email and phone number for my congressman in Washington whom I contacted immediately and said, Do not support HR 875. No wonder Agribusinesses are trying to pass HR 875. The seed holds the secret of creativity not to mention learning how to feed ourselves.
Posted by Unknown at 6:05 PM No comments: