Messages in the Mess

During my morning walk, I pondered how folks refer to the world as being in a 'mess.' I've heard the word mess used in reference to the Gulf Oil Spill, to the ongoing political dynamic in which we seem stuck blaming and passing the buck, to someone's marriage or status as in "you know he/she, well they're just a mess."

Now in Middle TN, we have our mess birthed by the May Day Flood. I do not mean this cruelly toward those who lost so many personal possessions as well as loved ones, but now we've mounds of belongings, personal and prized, headed to who knows where as someone decides where all the mess will go.

Our flood was the latest in a string of natural 'messes' beginning with earthquakes and volcanoes.
Maybe Mother Earth is saying, "May Day, May Day. What if this great mess which seems like the Mother of all messes, the mess of the ages, at least the recorded ages, holds messages for us if we are open to listen? What if Mother Earth really is crying out for us to wake up, to stop trashing her and referring to things as a 'mess' but to also start acting in ways that show our gratitude for this home she's given us?

The story below crossed my mind. It seems even more applicable now....

Lately on morning walks, I often wish I had remembered to bring along a bag in which to collect trash. Earlier this week while walking and wishing, I heard a honk from behind me. As if he had read my mind, Jerry stopped and yes, had a bag, one of our many cloth ones, in his truck. I grabbed one.

Within a half mile of foraging, this modern day hunter/gatherer had filled her bag with trash and carried a portion of a car fender in her free hand. This probably didn't qualify as legitimate foraging. Foraging implies hunting. I took no more than three steps from the sidewalk to pick up each item collected. 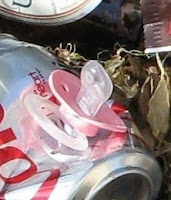 The most unusual of my finds were the smallest and largest objects, a tiny pink pacifier lost possibly by a strolled child and a car fender, black and plastic with a partial frame still attached on the backside.

Walking along, I studied the fender. Suddenly I realized its shape was that of a head, the metal frame being the open jaws of an animal. Curious as to what else I might discover, upon returning home I laid out my collection to find a telling assortment of things, a collage to our

As the photo shows, I had an assortment of modern day 'pacifiers,' a myriad of food related ways in which we potentially pacify ourselves from candy, beer and soft drinks to the more health conscious water and nuts. I'm not anti-eating or any of the above food stuffs, but it only took a moment to realize my mess held many messages.

Seen symbolically the jaw-like frame represents the dying industrial beast we've collectively created consuming without consciousness as to what we put into our bodies as well as into Mother Earth and the atmosphere.

Of course, most everything I collected was packaging. Only a short time ago, foods were packaged in their skins and peels which were often eaten for nutritional value. (Now we buy vegetable washes to remove chemicals from the peels and place them in garbage disposals or garbage cans.) From magazine covers and runway models to boxes and containers, we've become a packaging oriented society. Outer's been valued more than inner.

The products my imaginal animal in the photo consumes makes me also consider what we now produce and how we value production. We formerly valued the hand-made. We needed it for survival whether it was crafted, quilted, grown, sewn or thrown (as in pottery). More recently we've valued the technical, which allows me to write and send this story around the globe in seconds. The hand-made has morphed into the hand-held ie. the cell phone, computer and gaming devices through which we text, twitter, facebook with friends in this dimension and face-off with x-box creatures from other dimensions.

The value of products is determined by how much a share of stock increases which is connected to cheap labor (from those worlds away) and materials (from earth) rather than how inter-connected something is to the web of life or its true nutritional value if it's a food product in the case of my collage.

As I thought I had exhausted or seen all the messages in the mess, I realized the deeper message. What if the imaginal beast is spitting out what it no longer wants, not just spewing packaging into landfills, but saying, "Enough. Come on, people, quit competing and controlling. Get cooperative and creative. Get out of the package of small mind. Break open the package of your unused capacities."

Then I got another level of the mess. My car fender beast is black, representative of our shadow (unconsidered actions) but also symbolic of the void from which all new form arises when we marry consciousness and creativity thoughtfully.

I like to think the tiny pink pacifier represents the birthing and rising feminine energy present in men and women as we open to learning from one another and working relationally and collaboratively.

The treasures in my trash or the messages in what I considered a mess reveal the Old Story giving birth to the New Story which is the Whole Story, not a story of black and white or good and bad, but a beautifully evolving story. Through our unconsciousness we've participated in being the beast and through consciousness we can listen and birth another part of the story.

Imagine the shift if next time you take a walk, you foraged for the experience awaiting you. Take time to see what's beneath the obvious. Listen to your experience for in every seeming mess, there's a message and to me that is very good news.
-Dawn!, the Good News Muse, 5/20/10
P.S. Learn more about deeply seeing the New Story with Jean Houston through Social Artistry, a new paradigm for the leader in each of us especially needed in these times.

Middle Tennessee poet Russ Peery forages for experience on daily walks then writes about it. Check out Russ at http://www.russpeery.com/
Posted by Unknown at 2:26 PM

Dawn, I always love the way you 'see' and your beautiful gift of expressing it through words that touch the heart. Don't stop looking, seeing and sharing! I, for one, am blessed by you.