"Beneath the headlines, there's a story of heart lines."
I fell asleep again last night a smile on my face, filled with joy still reliving the closing moments in Saturday night’s U2 concert. In the days since, I’ve relived the experience in memory and now thanks to the internet I’ve watched it repeatedly on-line and even discovered the moment made it to mainstream news.

I’ve found myself wondering if Saturday night’s exchange between U2 and Adam Bevell might be the new “shot heard round the world” (video shot) in the revolution of the heart.

(If you know the story or don’t want to read my version, scroll down to the bold below.)

For those unfamiliar with the story, at the encore’s end, Bono began to talk with someone down front in the crowd. Living in Music City I thought it odd that he’d wait until the show’s end to invite a Nashville Name on stage to join him. Yet who am I to know how these things go certainly when it comes to star to star protocol. I’ve only seen the Dixie Chicks and Springsteen since concerts became events. And although I’ve heard David Sanborn, Herbie Hancock and Gladys Knight in the past year these were low key compared to gargantuan 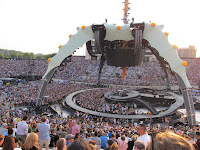 screens, moving ramps and U2’s ‘claw’ which I’m still trying to figure out but for now am personally seeing as a reference to our being in the claws of the machine.

Just when I’m thinking the show’s over, Bono’s asking “What do you want to play?” and the guy to whom he’s talking is helped to 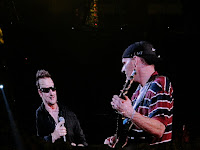 the stage. Bono refers to the guy as “Dude” a name I don’t recognize among Nashville musicians. I can tell there’s something slightly different about this guy as he bends over to have a guitar placed around his neck. I realize he’s not a ‘star’ and suspect he’s petrified. I would’ve passed out from petrification long before this point. It’s then he says he’s dedicating this song to his wife Andrea and begins to strum as Bono sings “All I Want Is You” and the band joins in for the entirety.

This alone, a regular, not-a-Music-City-name, guy playing with U2, is worth the price of admission. The song concludes and the Dude, Andrea’s husband takes off the guitar only to hear (along with the other 44,999 of us) Bono say: “You can have the guitar.”

You can have the guitar? Yes, Bono gave him his personal guitar, a bright green, Irish falcon.

I stayed up until two that morning something I’ve not done in I can’t remember when determining how to post photos including the one of “Andrea’s husband.” I along with many then awoke Sunday to learn the story was even better. “Andrea’s husband” is blind.

I’ve since discovered numerous videos of the experience and sense why people become U2 fans. I’m already a fan of watching just this one song played repeatedly with the Dude on the internet.

This morning I couldn’t let another day pass without sitting down to ponder why this has event has captured me. Why am I still smiling from the exchange and now crying when I watch replays?

Is it as simple as this unexpected good news story among all the negative, greedlines of today grabs me?

Andrea’s husband who I’ve since learned is Arizonian Adam Bevell was the recipient of a beautiful gift allowing those of us who witnessed this act to be recipients too. We were washed in waves of beauty and kindness in that moment, fluctuations of love now carried across the ethers thanks to the internet and word of mouth.

This is part of the allure of this event for me. Bono impacted the individual systems of thousands who now in turn impact the global system of potentially millions.

Somewhere mid-concert, Bono joined by his back-up singers (aka the crowd) opened one song with “Amazing Grace.” Anyone who’s ever come close to church and many who haven’t know the lyrics “I once was blind but now I see.”

Adam was blinded over time due to a progressive eye disease yet he continued to play music and found grace, amazing grace in U2s music long before Saturday night. He’s shown up in his life when he could have quit and he’s physically shown up for concerts, traveling to at least twenty shows.

I’m not literally blind and yet I’m guilty of not showing up for my own life repeatedly sometimes it seems for years at a time because I fall into ignoring or the pain of being engaged in life has seemed unbearable.

And although I think of myself as being aware and awake I’m often blinded by fear, fear that sneaks and seeps in. I’m blinded by rut and routine. I live in my box not knowing I’m even in it.

Adam did more than show up. He asked his brother-in-law to make a sign reading:

Blind Guitar Player –Bring Me Up.

Adam showed up and asked to play. He didn’t beat around the bush. “Bring Me Up” is fairly straight forward He did his part by continuing to show up, to pay attention to what he wanted then asking for it just like he was invited to do, just as we were all invited to do.

Being blind, Adam didn’t see the two questions scrolling across the round screen over the stage during one song, the questions that asked:

What do you want? How will you ask for it?

Adam wanted to play and asked to play. Adam said: Bring me up and in turn we were (to stay with the concerts space theme) beamed up. We were beamed up to a higher, deeper level and now we’ve the opportunity to stay awake on that level.

A quote hanging in my hallway reads: “Most people don’t know that there are angels whose only job is to make sure you don’t get too comfortable and fall asleep and miss your life.”

If we’re fortunate we’re awakened by someone or something, a friend, a stranger, a pet, a moment or event offering us our equivalent of Bono’s guitar.

This is I realize is my deeper connection to Adam. His event mirrors my own personal encounter in a dark time of heartbreak when I was seeking a reason to live.

Tickets to a Chicago Bull’s game with the Orlando magic for my nephews were my Irish Falcon. Adam’s Mesa to Nashville was our Nashville to Chicago only to learn our tickets were not there as we promised. In my heart I had longed for those tickets. I did the work I knew to do. My Bono was Bill Murray. My Irish Falcon was one ticket which ultimately led to four more miraculous affordable tickets for a highly sought after game. This sparked my return to writing but more than that it was my light in the darkness, my moment of amazing grace.

Moments of grace are offered up daily as humans interact for we are here to be angels to one another. The key is to be present and show up as Bono and Adam did, to know what you want and put your heart into it.

We may think we don’t have Irish Falcon’s to offer another but we have the very thing someone else needs in any given moment be it a smile, an eye-to-eye look that says, “I see you,” encouragement as simple as “You can do it” as the guy on the Adam Sandler movies shouts at the right time and as the guy behind me called when Adam played Saturday night. 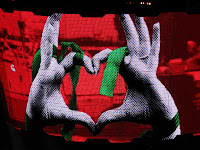 the opportunity to make heart lines amidst mainstream media’s head lines. This is the amazing grace of this time, all of us here now on Mother Earth are given the choice of waking or sleeping, impacting the personal and planetary with compassion or greed, attention or neglect.

Beneath the surface headlines, another story’s unfolding. It is the story of heart lines. Adam, U2 and You Too are part of it.

How will you ask for it?

P.S. One last thing about the Claw. Just as U2 played under the claw, We 2 are in the claws of consumerism and the resulting potential dullness, meaninglessness and darkness. Saturday night into the Claw was born an experience of Love and Light! As I wrote to Adam yesterday, mine this moment for what it means to you. Let its waves continue to impact you and allow it to bring something richer into your own life. I know I will and I hope you do the same.

Dawn, You bring such joy by the ways in which you respond to life. I am glad that you, like Adam, and like many of us, have had your moment of amazing grace. After all, that is ecstasy to me! Let's have some more....